“ACT II” BRAND NEW LIVE-ART-VIDEO & ALBUM TO BE RELEASED ON JULY 27th, 2018 ON earMUSIC. www.tarja-act2.com
Filmed during Tarja’s world tour “The Shadow Shows”, during which the influential heavy rock singer circled the world for 7 ½ times with over 300.000 km traveled and played over 200 shows in 40 countries in front of 1 million people.
“Act II” consists of the singer’s very intimate set filmed and recorded live at the Metropolis Studio in London, UK and the breathtaking live performance of one of her shows in Milan, Italy, as well as previously unreleased interviews and photo galleries.
The theatrical rock adventure “Act II” combines two incredible, yet slightly different live performances on video: The first chapter, “Metropolis Alive”, has been filmed two months prior to the release of Tarja’s 2016 success “The Shadow Self”. Twenty (20) winners from all over Europe were lucky to witness Tarja’s intimate, yet rocking 75 minute set at renowned Metropolis Studios in London, UK where the singer performed songs from her then unreleased album – for the first time in front of an audience.
“Act II’s” second chapter has been recorded on November 29th, 2016 at the magnificent Teatro della Luna in Milan, Italy and includes hits from all four Tarja albums such as “Innocence”, “Die Alive”, “Until My Last Breath” as well as an incredible cover of Muse’s classic “Supremacy”. That night’s set list also enchants the soprano’s long-time fans with a medley consisting of the distinctive Nightwish evergreens “Ever Dream”, “Slaying The Dreamer” and “The Riddler”. All topped off with a remarkable acoustic set, which presents Tarja classics in a brand new way.
Even though the shows deliberately differ in look, sound, approach to the music and adrenalin, both have one thing in common: from the very first to the very last tune, the state of the art production displays Tarja’s energetic performance and her graceful, charming presence.
“Live videos became more and more mere documentations focusing on a band’s performance in a remote, distant and technical way. The lightshow and the LED’s only support the band’s performance but have no significance of their own.
With “Act II” it is different. Here everything has significance, every little detail is important because it is not only a live recording, a live-documentation.
In the video, every song was treated in order to transport the feeling I wanted to express live at the show. As close as possible to the way the audience might have felt it that night. We used additional footages, used video snippets, photos and graphics and worked with lights, framings and reflections, changed colours and created moods, distorted pictures and inserted slides. And sometimes we kept the pure picture because itself it transported everything we wanted.
“Act II” is not a live-video, it is a live-art-video and you are free to discus it very controversially; which is exactly what I want.”

“Act II” is going to be released on July 27th, 2018 on earMUSIC as 2CD digipak, 3LP Gatefold (180g, black), DVD, Blu-ray, Limited Mediabook 2CD+2BD (incl. two full live shows filmed at Woodstock Festival in Poland and Hellfest in France as bonus) and Digital.
A wide variety of exclusive, limited fan items and bundles can be found on Tarja’s official web shop:
https://tarja.tmstor.es/
“Act I”, Tarja’s first ever live release, charted Top 10 all over Europe as well as almost all over the world, with a sensational #5 in Germany’s General Charts. The video version even remained for over two months at the peak of the Finnish music video charts.  “Act II” keeps the energy and aesthetics of its predecessor, but adds a new chapter to the live saga in a brand new way.
“Turn off the lights, volume up and dive into the show!” – Tarja
For more information visit  www.tarja-act2.com 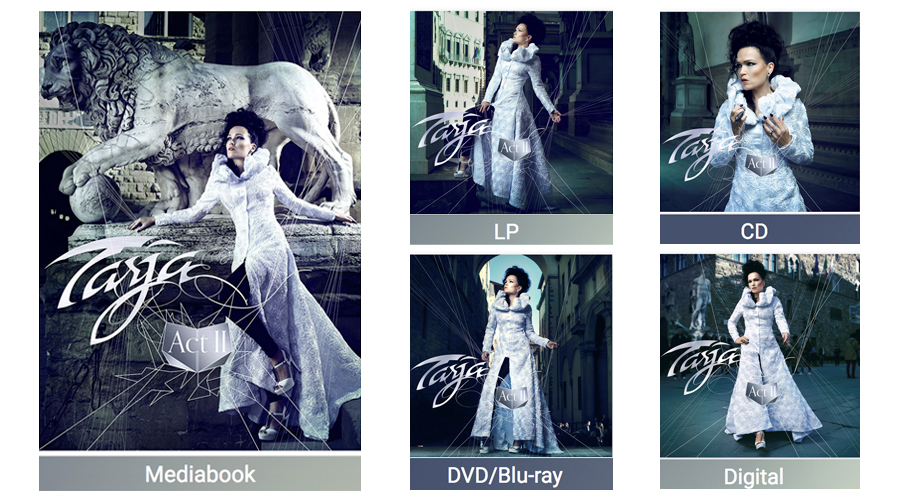