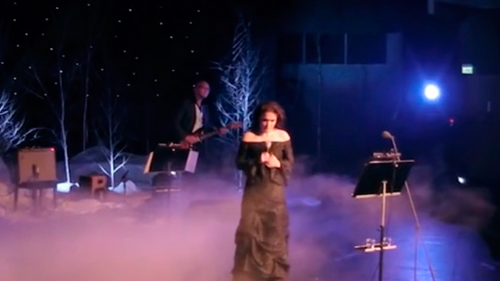 More than 7600 readers of Finnish newspaper Iltalehti voted in different categories for the personalities of the year 2006 in Finland.
They chose Tarja as the best Finnish female singer. Thanks a lot to the people that voted!
Tarja’s Christmas Concert tour is now over. Beside the people that assisted to the shows in Finland and Russia, YLE TV2 Channel in Finland broadcasted the show from 12.12.2006 in Lahti. The estimated audience exceeded 450.000 viewers with a 30% of the share (every third TV set was on to watch the concert).

The album Henkäys Ikuisuudesta was voted by radio music journalists in Finland as the Christmas album of the year.

Tarja is at the moment having a deserved break to concentrate in her forthcoming album that is already in the process. To close the wonderful chapter of the Christmas album and tour, we leave you here with two new photos: Tarja with the Platinum award for sales in Finland of Henkäys Ikuisuudesta and Tarja with the flowers that fans from Moscow gave her in the last concert of the tour.

Thanks for the Moscow and Saint Petersburg fans for the flowers and for all the rest of the fans, thanks once again for the incredible amount of gifts, emails and letters received and the rewarding feeling of the applauses, smiles and tears.